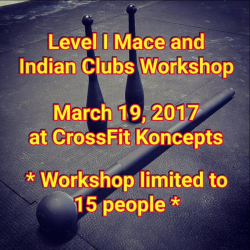 There are three tools that I spend the majority of my time training with. They are the Kettlebell, the Mace and the Indian Clubs. I know that it's a short list but I choose to master the tools I work with and eke the most out of every technique and repetition.

Most of my strength and conditioning work is done with Kettlebells.  After using them for over sixteen years I have them to be the most efficient in keeping me strong, balanced and anaerobically "challenged". The only downside is that after years of heavy Kettlebell Snatch training, in addition to several injuries ranging from tactical to stupid, I've done some serious damage to my shoulders. Nothing life threatening but my mobility has been compromised and I was in constant pain. So much so that I regularly avoided Pressing, Snatching and Pull Ups knowing that I would be in even more pain for several days afterwards.

After several consultations with doctors I was almost to the point where I was either going to have to endure regular cortisone injections in both shoulders (not fun at all) or shoulder surgery.  Neither of those options were particularly appealing. I was sharing my situation with a friend (Richard "Army" Maguire) who has had his share of injuries and surgeries and he recommended that I hold off on the shots and the surgery and see if I could mediate the problem myself.  How? By spending a couple minutes every day using the Mace and Indian Clubs. I was a little reluctant to do anything that might piss off my already cranky shoulders anymore... but Army convinced me to give it a try.

"Armed" with a short list of techniques and guidelines I set about testing out my shoulders. Strangely, instead of being painful, the training was not only invigorating but it made my shoulders "full" and infused with blood. I kept training, for no more than ten minutes a day, and within two to three weeks I was nearly pain free. Within a month of daily training was not only pain free but I was able to Press and Snatch pain free... something I had been unable to do for several years.

If you've read this far then I hope you will join me on March 19th and learn more about these two tools.  I think you will find them to be exemplary additions to your toolset and ones that you will turn to regularly, for not only your own training, but for that of your clients.

Follow this link to get more information about the workshop and how to register. But... don't wait too long!  As of 03/08/17 we only have ten spaces left!