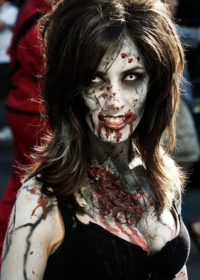 Training for the Zombie Apocalypse?  Need to get some speed and power behind your katana sword so that you can lop heads off the pesky undead?  Looking for an edge over the walking dead when the shite hits the fan?  No problem!  All you need is The Zombie Snatch!

As a variation of you the traditional Kettlebell Snatch it will help you develop several attributes that will improve not only your Snatch technique, but your Swing, Rack and Press.  Because of the "dead" starting position you will need to explosively drive through the hip hinge.  This extra attention to driving through the hinge will translate to more speed in other techniques as well as relying less and less on pulling the Kettlebell out of the backswing.  You'll also find that you will develop a more ballistic punch through at the top of the Snatch as opposed to a "flip and slam".  There is little or no arc in the ZS so it will also help you learn the proper trajectory for the conventional Kettlebell Snatch.  The ZS makes the Kettlebell travel close to the midline and hug the body so it makes for a very fast, tight and efficient movement.

The ZS is a lot fun to train and will give you something "the same, but different" to do when it is time to work on your Kettlebell Snatch technique. Enjoy the training and you never know - it might just come in handy when zombies attack!