I spent this past Saturday at York Barbell attending their annual Strength Spectacular.  It's always a great event and I always come away inspired and reinvigorated with my love of iron - this trip proved to be one that I will always remember.

With the Powerlifting competition going on in the main auditorium at York Barbell there isn't a whole lot of room for anything else. So each year a couple tents are put up outside to handle the strongman competition and other events.  This year I found myself returning to one tent in particular - the one that held the competitors in the United States All-Round Weightlifting Association National Championship.

It's hard to explain what USAWA athletes do other than to say that they do more "old school" strength lifts that are outside the boundaries of Powerlifting and Olympic Lifting.  Things like the Zercher Squat, One-arm Deadlift, and the Pullover and Press are among a long list of lifts that are performed by these athletes.  Coming from all walks of life, the athletes that I met on Saturday ranged in age from 14 years old to 87 years old; that's right, 87 years old and competing in a weightlifting competition!

One man that stood out from the crowd not only because of his size, but also because of his big heart and passion for iron, was Frank Ciavattone.  Frank is a legend (look up the word and you will see his picture) in the weightlifting world.  Frank has been a professional wrestler; given the title of "Worlds Strongest Man"; and has competed in weightlifting competitions for over 40 years and has amassed thousands of trophies for his effort.  I got the chance to talk to him about the USAWA, his career, and his love for iron. We also talked about his family and his health, which has challenged him with three bouts of cancer which he has successfully battled.  Frank was at the championship to lift for the last time, after 40+ years of competing, and I had the honor of being there to share the moment with his friends and fellow athletes.  It is a moment that I will be hard pressed to forget... 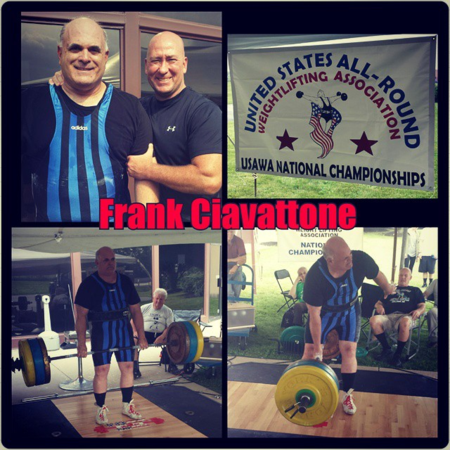