Do you want to lose 100 pounds?!?! Great!  All you need to do is follow this Kettlebell training program and you'll drop the weight and have ripped abs. Just follow this "Killer Weight Loss Kettlebell Home Workout" (great use of keywords in the title!).

Seriously?!?!  Yes, the guy demonstrating the techniques is in great shape but you can tell by the way he moves that he has no clue how to safely and effectively use a Kettlebell!  With over 800,000 views to the following video there are a lot of people who are looking at this and thinking that this is how you are supposed to move and use Kettlebells. He might as well be swinging around a frozen turkey...

BTW - not sure what I am pinging this guy on?  Check out his hips and you'll get some idea where to start...

If you are a runner and you're not taking care of your feet (and the rest of your legs) then you are asking for trouble!  Check out this great video by Mobility Master Kelly Starrett on how to "un-stick" your feet and make them feel great at the same time!

Got the opportunity to spend time with "Captain Kirk" Karwoski on Saturday at a Powerlifting meet in Westminster, Maryland (CrossFit Retribution).  Was able to soak up some more knowledge, share some insights into lifting and programming, as well as just experience the event through the eyes of a World Champion Powerlifter.  Memorable handful of hours that will resonate in my own training for years to come.

BTW - Congratulations to my friend Donald Blake Berry for getting a World Record in the Squat (420 lbs) in his age group!  Nice work Donald - keep going strong brother! 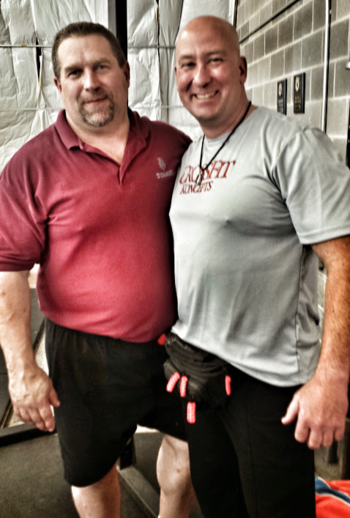 Geri has been for the last couple months on getting her Deadlift under control and she finally nailed it!  Geri pulled a PR at 245 lbs and then followed that up with another PR at 250 lbs!  Working on the basics every week, not going too hard or too heavy, Geri 30+ pounds to her Deadlift in a couple months.

What does the future hold for her?  Contrary to popular belief we aren't looking to go heavier on her Deadlift.  We're going to work on mastering the weight and then bringing her other lifts up to this level.

Congratulations Geri! They don't call you "Wonder Woman" for nothing! :) 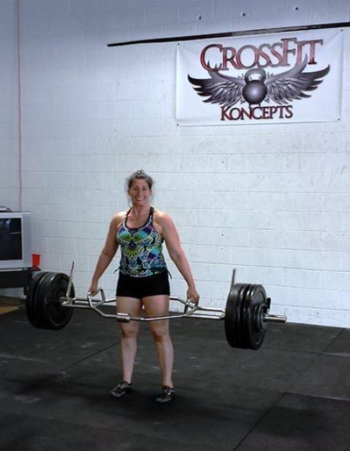 What is a Deadlift?

Seriously! What the heck is going on out there?  In one day I saw three videos on Facebook from CrossFit gyms touting a new Deadlift PR from a new member.  None of three looked anything like a Deadlift... not even close. Look, a Deadlift (DL) is not exclusively a Squat movement nor is it exclusively a Hinge movement.  Get it through your head that it is a hybrid between the two and that it is closely linked to both movement patterns and not the exclusive domain of one or another.

Watch some of the strongest men in the world DL and you will see what I'm talking about. Their torso's are upright, there shins are nearly vertical and they are driving off the ground with their heels and finishing strongly with their hips.  Check out Brad Gillingham pulling over 800 pounds for a great example of perfect form and follow through.  He initiates with his legs, driving off the ground (just like in a Squat) and then, once the bar is about to his knees, he starts driving with his hips.  Just watch:

Many people will argue that if you are doing DL's during a CrossFit WOD then the technique has to change. ABSOLUTELY FREAKING NOT!  Just because you are "doing it for time" doesn't mean you throw technique and safety to the wind.  As a matter of fact the exact opposite is true: you need to be especially cautious when you are under time constraints that you don't compromise technique or safety.  Under pressure is that absolute worse time to make compromises.

Do you want to see a really bad example of the DL?  Just check out Facebook on a daily, sometimes hourly, basis.  There are some really strong people out there that are putting themselves into a compromised position and pulling the bar off of the ground.  Are there some good CrossFitter's doing DL's out there? I'm sure there are - but there are also a whole lot who are being trained and coached to lift the bar in a dangerous and unsafe manner.  Following is a video with three notable CrossFitter's doing a WOD called "CrossFit Total".  Check out their form (starting at around 04:00) and see how their structure starts to deteriorate and how they rey to "sneak" the bar up.  Unsafe, unprofessional and potentially life changing faults that will catch up to you sooner or later if you keep lifting in this manner. Is this the movement standard that you want your athletes, or yourself, to lift to?

How can you recognize a bad DL? It's easy - it doesn't look anything like how Brad lifts the bar.  As a matter of fact it looks like the person is bent over and pulling the bar off the floor... which is exactly what you don't want to do.  Keep the bar close, keep your back tight, keep your torso upright and drive off the ground until your hips can finish the movement.  If you start to compromise any one of those elements then STOP!

Just for fun check out these epic fails while doing the DL.  Sorry if this is how you DL but I tried to warn you!

Look, this guy is in great shape and has a lot of videos on YouTube.  He literally has over a MILLION views... but he doesn't know jack about how to use Kettlebells!  Kettlebells are not just a weird dumbbell and they require a certain amount of training and understanding of their uses to make them effective, not to mention safe to use.  Don't be confused by the number of views - this is NOT how to use a kettlebell!

I bought my first Dragon Door Kettlebell over 12 years ago and I still use it pretty much every day.  I don't remember what I paid for it back then but it didn't matter - I wanted that Kettlebell so bad!!!  If you figure out what that Kettlebell cost me over the last 12 years it is literally fractions of a penny - and it was the best investment I have ever made.

A lot of people complain that Dragon Door Kettlebells are expensive and that they can get Kettlebells cheaper at Target, Wal-Mart, etc.  My advice to them is go right ahead!  The Kettlebells you get from them, and a whole slew of on-line sources as well, aren't worth the money you spend on them and I guarantee that they will end up doorstops or gathering dust in the back of a closet in no time at all.  Bright colors and bizarre configurations aren't going to make them any easier to use and for the most part make it a whole lot worse.  The design and specs that Dragon Door Kettlebells are made to allow for ease of use and safe handling - something that those other guys can't say.

You pay for quality and the money you spend is an investment in yourself. You are investing in your health, mobility, strength and your future. Look at it this way - you can buy a cheaper Kettlebell but you are not going to like how it feels in your had or how it lays on your forearm. You want a product this is designed by people who actually use the product day in and day out.  You won't find that with other Kettlebell manufacturers and if I started naming names you'd be surprised.

Check out this video by my friend RKC Team Leader Laurel Blackburn on why you want to purchase Dragon Door Kettlebells over other brands!

There are a lot, and I mean THOUSANDS, of terrible videos on YouTube that show you how to incorrectly and dangerously perform the Kettlebell Swing. All good intentions aside the people who are demonstrating the Kettlebell Swing don't have the training, expertise and experience to be doing them much less teaching others how to perform them.  I can list on one hand the number of people I look to for my own Kettlebell instruction and you can bet that Andrew Read, Master RKC is at the top of the list.

If you are a runner or and athlete of any caliber, the Kettlebell Swing is an amazing exercise that will enhance your endurance, power, speed and mobility.  Check out the following video by Andrew and RKC Team Leader Shannon Scullin on how to properly execute the Kettlebell Swing.

While I am constantly amazed at the crap that shows up on YouTube I am even more amazed at how many people watch and respond to the crap on YouTube!  Ryan Shanahan has been peddling his "style" of kettlebell training for a while and even has a couple infomercials out on late night TV.  If you watch this video (with over 75,000 views) I think you will see that he actually doesn't know jack about how to properly use a kettlebell, to build mass or anything else, but you should also be shocked at how poor the technique is.  If you come across someone using a kettlebell this way my suggestion to you is to turn around and run in the other direction!

I'm a huge fan of the body weight Pistol.  It tests the strength, balance, mobility and determination of the athlete like no other squatting movement can.  Mastering it can take a while but once you get it you are ready to start adding some repetitions to the process.  I also really like what are called Chinese or Airborne Squats.  This is a body weight squat with the leg bent and touching down behind the opposite heel.  Not as hard as the Pistol but still a great challenge.  Check out the following video of Master PCC Al Kavadlo doing what he calls a Shrimp Squat. This is a great variation of the Chinese Squat and something I'm going to need to try myself!