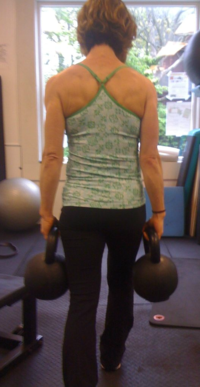 Michael Boyle is a strength and conditioning coach that is considered among the best in the industry.  His website gets tons of hits and his speaking engagements are always packed.  In other words, when he talks people listen.  He recently wrote an article for T-nation titled "Exercises Saved From the Dumpster".  In it he takes a second look at exercises that he abandoned at one time but now (due to various inputs) looks at in a completely different light.

NOTE: all trainers have techniques and methodologies that they accept, adopt and abandon... and some for good reason.  In some instances you end up going back to something because it's simple, effective, and there's nothing else out there even close.  I've found this to be the case a number of times throughout my training and I'm sure it will be true in the future as well.

BTW - what are the "Big Three"? Turkish Get-ups, Farmers Walks and Deadlifts. Those should all be familiar to every CrossFit Koncepts client... and if they aren't then they will be! :)

This is only a preview. Your comment has not yet been posted.

The letters and numbers you entered did not match the image. Please try again.

As a final step before posting your comment, enter the letters and numbers you see in the image below. This prevents automated programs from posting comments.

Having trouble reading this image? View an alternate.

Comments are moderated, and will not appear until the author has approved them.

(Name and email address are required. Email address will not be displayed with the comment.)