Memorial Day is traditionally the start of Summer for most people.  Their first trip to the beach, their first sunburn of the season, and the anticipation fo school being over.

To me Memorial Day has always been a bitter-sweet holiday.  all of my adult life I have either worked directly with or have had close contact with the military and I look at this day a little differently than most.  I look at it as a day when we recognize the sacrifices that brave and selfless men and women have made to make our country what it is - the home of the free and the land of the brave.

The following video, featuring Lt. Col. Oliver North, tells of his encounters with our warriors and their bravery and valor under fire.

I'm not really concerned on which side of the political line you fall on - never have and I never will.  Everyone has their right to an opinion - that doesn't mean I have to like yours or you like mine.  One thing I'm hoping we all can agree on is that putting a couple ounces of lead into Osama Bin Laden was an easy out for him but expedient for us (the United States).  Tossing his carcass in the ocean also solved a lot of problems as well.  Should I feel sorry for a mass murderer or his unfortunate family?  Don't count on it in this lifetime...

Enjoy the following video.  I've watched a number of videos from this gentleman and I really like his take on current events - like the demise of OBL. 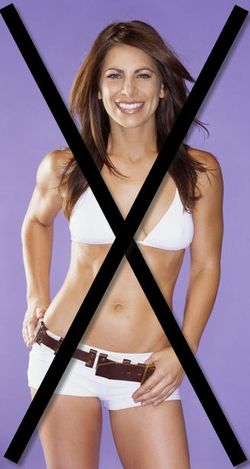 No, she's not dead... she's leaving "The Biggest Loser" and being replaced by Anna Kournikova (huh?). But, you ask, what will she be doing with her spare time?  She'll be working on the The Doctors and Dr. Phil.  I'm sure this a big step up for her and a huge step backwards for daytime TV viewers.

Well at least Anna is a relatively good athlete (but not a trainer) and will bring something other than a bad attitude to the show!

Maybe Jillian will use some of her spare time to get some Kettlebell training from an RKC in California (there are a butt-load full of them there) or even (heaven forbid) go to an RKC where they can do a reality TV show on her suffering! :)

The second annual Kettlebells For Warriors event at York Barbell was a huge success.  We had well over 250 people on-site for the inductions of Slim "The Hammer Man" Farman and Joseph "The Mighty Atom" Greenstein which also included a talk by Scott Adams, US Army Retired, speaking on behalf of the Wounded Warrior Project.  Featured guests and presenters were Dennis Rogers, Dan Cenidoza, David Whitley, Kim Woods, and Jedd Johnson.

More information about the event will follow... for now, thanks to everyone who attended and helped make the event a day to remember. 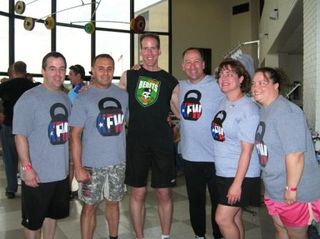 The following video was shot by Jedd Johnson and posted on the Diesel Crew web site, where he also gave a great rundown of the days events from his perspective.  Thanks Jedd!

With a large number of people attempting to PR on the Deadlift of late I just wanted to pass on some guidelines on how to safely work towards a PR.

Not The Best Way To Start A Workout

NOTE: I've actually done this before (my grip failed mid-pullup and I fell about 06 feet onto my back on the concrete) and I can tell you that's not a whole lot of fun... but it is kind of funny to watch! :)

Just wanted to update you all on the latest PR's on the Deadlift front.

Keep up all of the great work!

No, it's not another torturous workout!  Paul and Adam pulled 300 lbs yesterday for the first time!  Paul has been working up to 300 lbs for a couple weeks now and it has eluded him until now.  Adam has been getting some time in as well and made it look easy.  Congratulations to them both and look for more PR's from them both in the future! 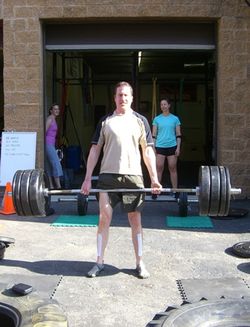 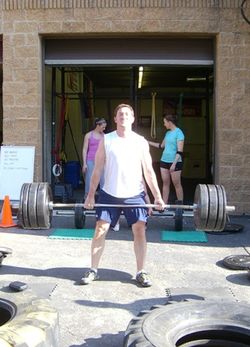 Just wanted to pass on to those who are following the groups progress with their Deadlift numbers that Dorothy, Kim, and Chris all PR'd last night with 175 lbs! All three broke past 155 lbs and then went straight to 175 lbs.  With some grunting and groaning, not to mention a few well placed curses, they all made the jump.  Congratulations! :)

BTW - please excuse the poor photographt skills!  All three PR's were in perfect form... my timing of the shots was off! 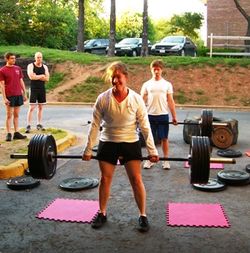 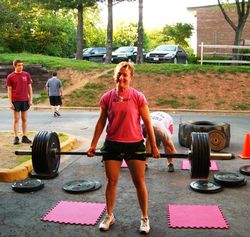 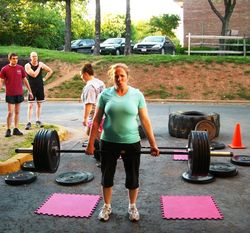 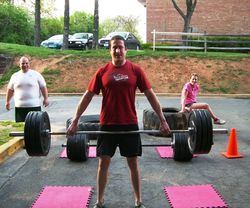 The Deadlift is one of the foundational lifts in Weight Lifting.  Once considered the true test of someone's overall strength it had been in recent years been supplanted in the gym by the Bench Press.  While the Bench Press is a good indicator of overall upper-body strength it will never match the "bang for your buck" you will get from developing a solid Deadlift.  Once referred to as the "Health Lift", because it was considered to be the most important lift you could do for overall health and well-being, developing your Deadlift will improve everything from your Pull-ups to your Box Jumps.

We've been doing several sets of Deadlifts as part of our warm-ups for the last month or so and have seen everyone rack up some impressive numbers.  Everyone has been able to Deadlift at least their own bodyweight and several people are "knocking on the door" or double-bodyweight.  Not to shabby for a bunch of Kettlebell-slingers! :) 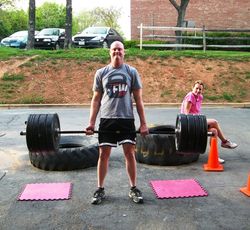 Interestingly, many of the people who were the most reticent to Deadlift are now the ones who enjoy it the most!  This is understandable because many people have a really hard time "wrapping their head" around picking up something really heavy, but once they do (and they don't get crushed in the process they are excited to continue.  I think the Deadlift is a great intro lift for most CrossFitters and all Kettlebellers in that it translates so well into all of the other techniques that we do as well one that you can see some immediate return from.

Keep up the amazing work and look for pictures here of some more PR's being broken and of our 400 LBS club members!