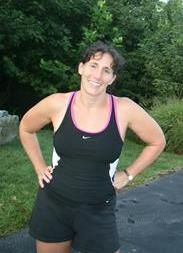 I've had the pleasure of knowing Geri Shapiro for a couple years now and the more I learn about her, the more I am amazed.  My friends always marvel at how much energy I have and how hard I work - if they only knew Geri that wouldn't be that impressed!  There is only ONE person that I know that can make me look like a total and absolute slacker - and that's Geri Shapiro!

Not only is she the Uber-mom (we just call her Wonder Women), but Geri is an Uber-athlete and always has been.  She's done triathlons and Iron Mans... and now she's doing the Boston Marathon on April 19th, 2010.  Geri is actually running for a cause called the Ally Foundation and she is looking for donations.  Here's where you can help: she's set a goal of $3000 for herself and she's almost there (as of 03/25/10 she was at $2180).  If each and every one of you gave up your Starbucks and Chipolte for just one day she would reach her goal immediately.

So here's my challenge to you: make a donation today and help Geri raise money for a very, very worthy cause.  I believe it is money well given and could very well save the life of someone you know and love.  Here's the link again: http://www.firstgiving.com/gerishapiro.